The car insurance arm of the AA has revealed that the number of car accident claims involving animals has increased. 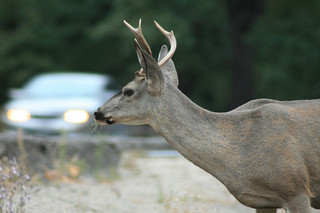 Deer are often killed or injured in motoring accidents

However, the animals involved tend to be not so much from the domesticated variety with more wild animals being responsible for car accidents.

The AA gave an example of a squirrel dropping into the passenger compartment of a convertible car being driven by a lady who was so surprised that she ended up hitting a tree as she lost control causing damage estimated at £5,500.

However, it tends to be larger wild animals who are the main culprits, in particular deer, as they are roaming around either early in the morning or at dusk that is when the roads are busy with commuters getting to and from work.

According to the AA’s records they had 112 incidents reported involving animals being hit in October and November 2012. For instance, in November, they had motor insurance claims involving thirty deer, five foxes, three badgers plus eleven more involving dogs.

Worryingly, the Department of Transport said that in 2011 eight people were killed involving wildlife accidents whereas in 2010 there was only 1 – a marked increase.

It is estimated that 450 motorists are injured in collisions with deer alone. A most unpleasant statistic is the estimate of 40,000 animals being killed on roads in the UK each year by cars.

Because of this, councils covering more remote areas like Yorkshire and Wales have erected warning road signs about the danger of sheep that are allowed to roam freely on moorland.

If you read the Highway Code it warns farmers and shepherds to avoid moving livestock during darkness due to the risk of collisions with traffic.

This will be another reason why insurance premiums are constantly under pressure. If only more motorists would slow down whilst driving through locations that are renown for having roaming wildlife on the move we may see a reduction in fatalities and injuries to both people and wildlife.