In the 12 months to the first quarter of 2017, Scotland has had the largest increase in fully comprehensive car insurance premiums basis in percentage terms than any other region in the UK. Those motorists living in the Scottish Highlands and Islands have seen their premiums go up by an average of 21%. This is quite a bit above the figures for the UK as a whole that saw premiums go up by 16% in a 12-month period. 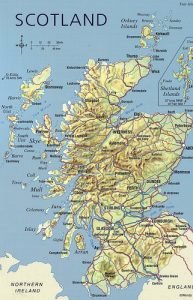 Scotland saw the largest percentage rise in car insurance premiums than any other region in the UK in the 12 months to Q1 of 2017.

The above figures are from the Confused.com Car Insurance Price Index – Quarter 1 2017 in association with Willis Towers Watson.

In Eastern and Northern Scotland there was a 20% rise in premiums in percentage terms that was closely followed by Central Scotland and Scottish Borders with a 19% increase. Inverness has seen premiums rise in percentage terms by an average of 26% to £585 per annum that is the highest amount motorist their have had to pay. Of course, that figure is still lower than the average for fully comprehensive car insurance across the whole of the UK that stands at £781 per annum.

It will be interesting to see what happens to car insurance premiums for the remainder of 2017 and beyond. Motorists have also had to deal with fluctuating fuel prices.

Not enough motorists shop around to see if they can get a better deal on their car insurance either when they are looking for cover for the first time or around the time that their existing cover is coming up for renewal. Nowadays, there are an awful lot of insurers all competing for business so it could be worth setting some time aside to obtain a number of comparative quotes from several insurers rather than just automatically renew your cover with your existing insurance company.

One of the ways of doing this is to use the services of a price comparison website that has an extensive panel of motor insurers on its panel. You can usually obtain quotes and policy details 24/7 and it is often possible to arrange the cover online.