One among the leading car manufacturers Vauxhall has brought forth a new solution for the UK roads this winter. The company has launched a range of snow socks, an attempt to reduce the mounting number of insurance claims that have been aimed at the car insurance comparison sites. With the winter weather starting to take its toll on the UK roads, the chances are likely that more of the motorists would find the need to make insurance claims. These devices or snow socks as they are being called can be used for any car type and are known to help drive safer on the ice. The snow socks have been designed using a fabric material which has been attached to the front wheels of the car thereby slowing the pace of the car in the snow and the icy roads. 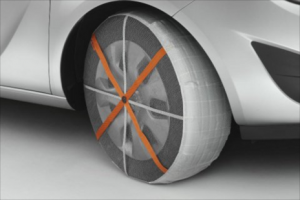 The functioning of these snow socks lie in the fact that they help better the grip of the car tyres on the road despite the icy texture. This means that you will be able to drive with much better safety during the snowy days. However, the drawback that comes with this invention is that they can be used for speeds of about 50 mph. It should be understood that with the current weather and road conditions, the safety is in driving at a decent pace. The car manufacturer claims that the snow socks are a much better alternate over the car chains and the winter tyres which were previously used as the means to control driving during bad weather conditions. The snow socks have a much better mechanism on controlled driving, thereby making them a better choice over the conventional methods.

With the ABI and the car insurance comparison sites citing accidents due to snow and icy roads peaking during the winter months, the snow socks are the best means to liberate oneself from the insurance claims.