The driving population in the UK comprises of a mixed group with people belonging to the working sector, the retired, while others include the student population. A recent research conducted by one of the prominent car insurance comparison sites revealed that more than 15 million of the motorists in the United Kingdom would be failing their driving tests incase they were asked to retake the driving tests at the moment.

With the tremendous change in the lifestyle over the years and with a considerable decrease in the laws of the state, more and more drivers have taken the slack in their driving habits, which have rendered them virtually incapable of safe driving. The study further reveals the condition of the motorists of the United Kingdom claiming that close to half the driving population has succumbed to poor driving habits, which would have certainly affected their qualifying tests if they had taken it today. 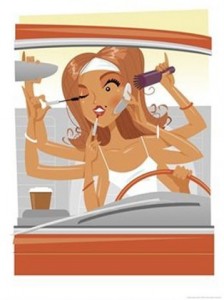 People in the UK, the student population as well the adult driving population have both resorted to habits such as talking on the cell phone while driving, texting while driving as well as eating while on the move, which are considered to be poor habits, which need an immediate check on them. The charities and organizations participating in the road safety have urged compulsory driving tests arranged for the license holders to check their credibility in driving. The increasing number of road accidents as well as injuries owing to poor driving has prompted the government to think about rechecking and retests for the car drivers.