Flirting Could be the Ultimate Insurance Premium Addition

United Kingdom has earned the place for being the nation with the maximum number of in-car flirts where the drivers have self-admitted to the fact that they have engaged in flirtatious gestures and talking while on the roads. A survey conducted across the nation by one of the top women’s car insurance comparison sites and insurance provider Diamond has found that about 2/5ths of the British motorists have engaged in flirting while driving and an appalling 15% of them have even crashed or reached a close shave while doing so. Among the 3000 people tested, half of the crowd dominated by men admitted to have flirted while one third of the women accepted to the activity. 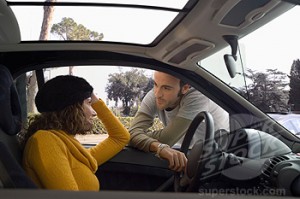 Men still stand at a higher chance of repeating the activity while driving which means that this adds up to their insurance policies as well. It is known that the insurance companies have always treated men as dangerous drivers and events such as flirting and accidents do not help much with revamping their image. What people often tend to miss out on is that flirting from behind the wheels is not entirely risk free. It is an active form of distraction and it has the ability to result in poor driving. Furthermore, drivers are likely to end up in a crash in a busy road.

The car insurance comparison sites within UK are not unaware of the effects that such casual habits bring forth. Although, women do not form the major group, men are known to get their insurance policies with heavy premiums. The research showed that almost 63% of the men have admitted to respond to an attractive female driver. With the car accidents and crashes increasing by the year, incidents such as these could levy a key imposition on the insurance prices. It is not a doubt that the insurance premiums continue to rock at 40% by the end of this month.