Car insurers Pay Out £35m Due To Flood Damage

The weather has been pretty appalling in recent weeks in the UK with flash flooding widespread. 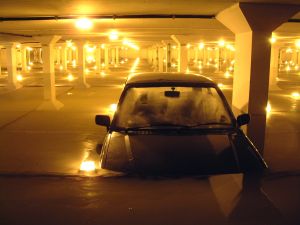 Well, as a result, the car insurance industry is forecast to be going to have to fork out £35 million in insurance claims.

The AA, one of Britain’s motoring organisations, estimates that a staggering 14,000 plus cars have been damaged severely or actually have had to be written off since 28 June due to the flooding seen in many places around this country. In the East Midlands the freak weather for this time of the year produced hailstones that were the weight and size of leather cricket balls.

The average amount per claim is £2,500 putting a total cost of around £35 million on the repair bill because of damage from hailstones and flooding.

The Director of AA Insurance, Simon Douglas commented that the claims department at the AA alone had received over 400 claims as a result of damage caused by flood or hail stones.

Simon Douglas said:”We noticed a sharp claims ‘spike’ at lunchtime on 28 June with a large number of claims for cars in Leicestershire that had been battered by giant hailstones. That storm alone led to just over 200 claims.”

The AA felt that hailstones are capable of causing so many dents that it is just not economical to repair a car resulting in many being written off.

Damage caused by water getting into the electrics of submerged cars and also parts of the engine and brakes can also make it uneconomical to repair them.

Interestingly, how often have you seen another car drive through a partly flooded road at great speed? Well, if the water gets into the air intake whilst the car is operational the engine may well be destroyed.

Of course, the weather forecast is not good over the coming days so you should drive with caution following the advice of the Met Office and motoring organisations as you would not wish to become one of those insurance statistics.