I thought that you might find my personal experience of dealing with a dent on my wife’s car interesting as it may save you some money should you be faced with a similar situation. 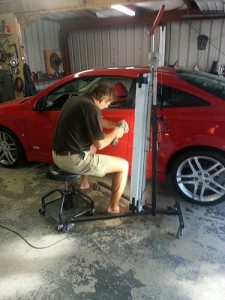 Unless you are very fortunate, it is likely that at some point in your life you are faced with returning to your car that you had parked in a car park whilst shopping to find that there is a small dent in the door panel due to the neighbouring car owner opening their car door and hitting yours. In our case, the car had a dent on the bonnet perhaps due to debris hitting the car in the stormy weather that we have been encountering here in the UK.

I had a look at the car insurance policy documentation on my wife’s car to discover that the excess is £200 – no small sum to have to pay. I also thought that if we were to make a claim this would affect the future cost of her car insurance as their would be a record of making a no-fault claim and future car insurance premiums may increase.

I took the car to a local car body shop repair business that we had used in the past and they inspected the damage. They informed me that there were two options. We could pay to have the bonnet repaired in the conventional way that would involve re-spraying the whole bonnet at a cost of over £200 or they could attempt the repair by undertaking a process called “paintless dent removal” at a cost of £60. If this did not work then they would have no option other than to revert to the more costly traditional method but I would only need to pay the difference.

I instructed them to go ahead with the “paintless dent removal” option and I am pleased to say that the work has been a complete success. You cannot tell that any work has been carried out.

So, next time you are considering claiming on your car insurance for a small dent you may wish to consider this form of repair work.